“I shot the first third of the movie above eye level, and then, by lowering the camera, shot the second third at eye level, and the last third from below eye level. In that way, toward the end, the ceiling began to appear. Not only were the walls closing in, the ceiling was as well. The sense of increasing claustrophobia did a lot to raise the tension of the last part of the movie.”
– Sidney Lumet, Making Movies

The above passage, taken from Lumet’s essential book on the process of filmmaking, is about Boris Kaufman’s work on 12 Angry Men. I watched the film for the first time since reading the book a couple of years ago, and although I’d always maintained that this is one of the strongest showcases of the art of cinematography, knowing the process behind the work shone a new light on what an incredible achievement the film really is.

What’s interesting about 12 Angry Men is it finds a way to visualize its incredibly challenging ideas about morality. This is a film that grapples with the fundamentals of the jury system; it questions the ways in which personal prejudices can come into play in such a process and it scrutinizes every member of jury. That it does so with continuously dynamic camera work is its true genius. In Lumet’s hands, each manner of framing can come to convey a completely different meaning or evoke an entirely unexpected emotion. 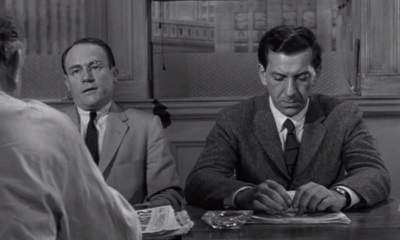 Take the shot above for example. Up until this moment in the film, every shot is composed of multiple characters or of either side of a dialogue between two jury members. Here, for the first time, the camera focuses on a juror (Jack Klugman) who isn’t an active participant in a conversation, in this case one between the man sitting next to him (E.G. Marshall) and the one sitting across from him (Ed Begley, whose right shoulder is visible in the frame here). At this point, all three jurors believe the boy at the centre of the trial to be guilty; yet, when the other two men begin to talk about how “these kids from these slums always turn out that way,” Lumet’s camera invites us to focus on the gradually changing expression on Klugman’s face. He eventually cuts the conversation off, announcing pointedly that he’s lived his entire life in the slums and that the two are biased in their judgement. Later, when the first secret poll is taken and it turns out that Henry Fonda has managed to sway one juror his way, all eyes are drawn to Klugman, not just in the room but from the audience as well. Another juror steps up and announces that it was he who changed his vote to ‘not guilty’ but the seeds of suspicion has been sewn about Klugman’s character. Lumet knows how to play with our expectations. 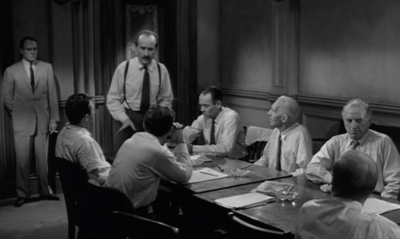 A similar proposition is at hand in the second shot, though through entirely different framing. Here, George Voskovec, who plays the most articulate member of the jury, is explaining his reasonable doubts. Marshall has been firm on his stance so far that the boy is definitely guilty and he’s shown no signs of warming to the opposition. Yet, here we see him separated from the crowd, almost hiding in the corner as he begins to doubt himself. Though Lumet’s camera remains static and the conversation happens elsewhere, our attention is subconsciously drawn to the juror standing afar. Marshall ponders whether he can find holes in his unwavering logic about the murder; and lo and behold, a few minutes later he does, becoming the penultimate piece of the puzzle that solves the jury’s verdict.

No amount of dialogue or exposition can make the point quite so poignantly: Marshall removes himself from the crowd, begins to think silently, questions himself and is nearly convinced that he was wrong; all in a single static shot. Such brilliant compositions occur tens, even hundreds, of times during the film. The concept of 12 Angry Men might be theatrical, as is the original source, but the film itself is almost anti-theatrical in its presentation. Every one of its elegant frames is a lesson on how filmmakers can transcend spatial constraints through the never-ending means of the medium.