*A version of this piece was originally publish at The Film Experience, to commemorate Jean-Claude Carrière’s receiving of an honorary Academy Award. Generally speaking, I am opposed to the idea of past winners receiving honorary Oscars. This, after all, is an honor bestowed on a recipient whose career not only merits the attention, but also lacks it. When there are so many giants of the medium that the Academy hasn’t recognized, why double dip with already rewarded names? But there is something incredibly satisfying about seeing three time nominee and one time winner, Jean-Claude Carrière, receive an honorary Oscar this year. His is one of the most fascinating careers in film history, and one that has lasted six decades and spanned several countries and languages.

Carrière started as a novelist, his first work published in 1957, five years prior to winning an Oscar in the best short film category for Heaureux Anniversaire. In the intervening fifty-three years between his two golden statues, he’s worked with filmmakers as varied as Jean-Luc Godard, Andrzej Wajda, Louis Malle, Jonathan Glazer and, most recently, Abbas Kiarostami who penned him a short but memorable role in Certified Copy.

His most fruitful collaboration, one that still arguably defines his career still today, was cultivated in the 1960s. When Luis Buñuel asked producer Serge Silberman to find him a young French writer with whom he could collaborate on an adaptation of Diary of a Chambermaid, he was introduced to several screenwriters at the 1963 Cannes Film Festival. Carrière was the one who hit it off and went on to co-write the film with Buñuel. They partnered up together five more times after that: Belle de Jour, The Milky Way, Discreet Charm of the Bourgeoisie, The Phantom of Liberty and the surrealist master’s final film, That Obscure Object of Desire. Quite a streak!

The second and fourth of those collaborations are the films most frequently discussed today among Bunuel’s masterpieces, and for obvious reasons: the former gave platform to an iconic, career-defining performance to one of the world’s biggest screen stars in Catherine Deneuve; the latter remains one of the most polished examples of Bunuel’s brand of ordered chaos and a deliciously off-kilter winner of the best foreign language film Oscar. Carrière and Buñuel replicated a similar structure to Discreet Charm in The Phantom of Liberty by telling each other their dreams every morning, shaping the film’s episodic narrative in the process.

That type of friendly collaboration happened quite frequently. Carrière once estimated that they must have shared at least two thousand meals together over the years and countless other conversations, continuing all the way up to Buñuel’s death, which left their seventh film, A Sumptuous Ceremony, unfinished. Still, much as one regrets the films that could have been had Buñuel’s ill health not ended his career, their final collaboration is quite a high note to end on.

That Obscure Object of Desire is the pair’s best film and possibly the best work of their respective careers. A relatively straightforward film by their measures, it tells the story of Mathieu, a wealthy Frenchman played by another frequent collaborator in Fernando Rey, who becomes infatuated with Conchita, an elusive, young Spanish woman. Mathieu narrates the story of their turbulent relationship to fellow passengers on a first class ride between Paris and Seville.

Buñuel and Carrière had discussed using two actresses to portray one character before the film but had eventually settled on Maria Schneider for the role of Conchita. Shooting began but a few days and a few alleged on set problems with Schneider later, they dropped her and went back to their outlandish original idea, casting Carole Bouquet and Angela Moreno in the role. The decision proves crucial to the success of the film. The two actresses don’t just look different but act as though they aren’t even playing the same role, thus embodying different facets of a character whose complexity and irreverence befuddles Mathieu. The youthful combination of innocence, submission and fiery sexuality takes new shapes as Conchita’s physical appearance changes. 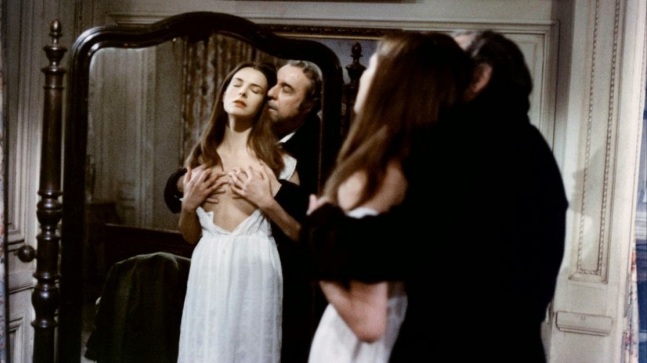 Mathieu cannot decode her character. He is at times empowered by her and at other times completely humiliated, embraced as much as ignored, invited as much as rejected. He is a man whose alpha status is threatened, but his unpreparedness for this shift in power means he’s unable to prevent himself from lashing out. When he seeks (and receives) affirmation from his travel companions that he was right to viciously beat Conchita for refusing to have sex with him, the woman appears at his cabin and dumps a bucket of cold water on Mathieu’s head, figuratively castrating him.

Set to the backdrop of increasing terrorist activity in Europe, Mathieu’s paranoia about his sense of self extends beyond his inability to understand the woman of his dreams and, more generally, a shift in sexual culture. Buñuel captures these conflicting dynamics with the intelligence and precision that typifies his work and in the process confounds his audience as much as Mathieu. That all these ideas come together so seamlessly to create a timeless commentary on the clash of the old order with the modern world is no surprise: this is the work of two artists who had come to a perfect understanding without compromising each other’s wild creativity, working together in complete harmony. One, a filmmaker who remained exuberant and incisive, and never lost his touch until his death; the other, a writer whose work had matured and reached its formal and thematic peak.